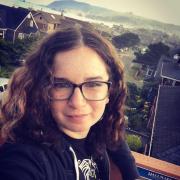 Sarah Fader is the CEO and Founder of Stigma Fighters, a non-profit organization that encourages individuals with mental illness to share their personal stories. She has been featured in The New York Times, The Washington Post, The Atlantic, Quartz, Psychology Today, The Huffington Post, HuffPost Live, and Good Day New York.

Sarah is a native New Yorker who enjoys naps, talking to strangers, and caring for her two small humans and two average-sized cats. Like six million other Americans, Sarah lives with panic disorder. Through Stigma Fighters, Sarah hopes to change the world, one mental health stigma at a time.

Overall, about 30% of those who use social media spend more than 15 hours per week online. This can greatly reduce your ability to enjoy real life. It can also cost you relationships, jobs, and an education if you spend too much time online. If you are spending several hours a day on Facebook, Twitter, and Instagram, you are not going to have enough time to work, study, or spend time with loved ones. You may have social media anxiety disorder and it can also affect your health, both physically and mentally.

Spending too much time online has been proven to cause illnesses such as eye strain, neck pain, and lower back problems. In addition, the sedentary way we sit around and “talk” to people on Facebook can cause physical illnesses such as obesity, heart disease, nutrition problems, and a risk of stroke and certain kinds of cancers.

Researchers have found that using social media obsessively causes more than just anxiety. In fact, testing has found that using too much internet can cause depression, attention deficit hyperactivity disorder (ADHD), impulsive disorder, problems with mental functioning, paranoia, and loneliness. It is more than just the pressure of sharing things with others, it is also about how you may be comparing your life with others you see on Facebook. Many people see that someone on Facebook who has a great job, excellent husband, and beautiful home and they feel happy for them. But, others can feel jealous, depressed, or may even feel suicidal about their own life if it is not as “perfect” as those they see on Facebook.

What You Can Do

First of all, just realize that many people who post all that great stuff on Facebook have a normal life just like you and me but they only put the good stuff on Facebook. If your life is not as awesome as some of the people you see on Facebook, it is not going to get any better by sitting there obsessing over it. You have to get out and enjoy your real life, not your social media “life” because that is not a real life. If you are having trouble doing this or you just need to talk to someone, there are people who can help you with this. You do not have to have an appointment or even leave your home to do it. Talk to an online therapist or counselor now and you can feel better by tomorrow.

Posted in steve_wiegand | Comments Off on Social Media Obsession and Anxiety